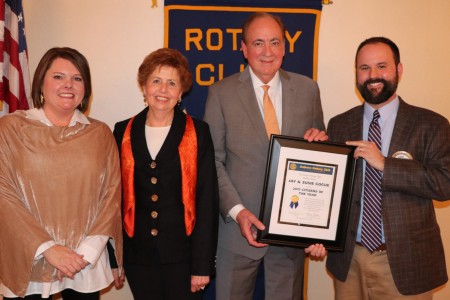 When Jay and Susie Gogue moved to Auburn in 2007, “Gogue” was barely a household word, and neither likely would have been stopped in the aisles of a local grocery store. Ten years later — at its Wednesday, Jan. 10 meeting — the Auburn Rotary Club celebrated the Gogues’ decade-long legacy of bettering Auburn University and the city it calls home by naming the couple as its co-citizens of the year.

The Auburn Rotary Club has honored an individual, individuals, businesses and nonprofit organizations as its citizens of the year since 1983. The award is bestowed to those who exemplify Rotary International’s local or global service focus. Elected or public officials nominated for the award must have community contributions beyond their immediate public service duties.

In presenting the award on the behalf of the club, Citizen of the Year Committee Chair Martee Moseley said “Team Gogue” was a well-deserved moniker often used by locals referring to the couple’s community impact.

“It was very clear that in all they have done professionally and civically, they have operated as a team,” she said.

To mark the honor, the Gogues received a framed certificate noting that their civic contributions have bettered the Auburn community and modeled Rotary International’s tradition of “service above self.” In addition, the Auburn Rotary Club made a $1,000 contribution to a charity of the Gogues’ choice, which was the Food Bank of East Alabama.

“Every once and a while, we talk about the Auburn Experience — the words we use are ‘compassion with action.’ As a community, this place has tremendous passion, and it’s where we do something about it,” Dr. Gogue said when accepting the award on behalf of himself and Mrs. Gogue. “It’s quite an honor that you recognize both of us, and we’re most appreciative.”

After leadership appointments at Clemson University, Utah State University, New Mexico State University and the University of Houston System, the Gogues — who both graduated from Auburn in 1969 and will celebrate their 50th anniversary this year — moved to Auburn in July 2007 upon Dr. Gogue’s appointment as Auburn University’s 18th president. His 10-year tenure as president was marked by increases in student enrollment, the research enterprise and outreach partnerships.

The Gogues’ dedication to supporting the community outside Dr. Gogue’s day-to-day duties as president equally endeared the couple to the community and created an enduring legacy for the university and the community alike. Their shared vision for a world-class performing arts center that would benefit both the university and city led to the naming of the Jay and Susie Gogue Performing Arts Center in their honor. Construction of the performing arts center is expected to be completed by August 2019.